We don’t know why Shatta Wale has decided to be on the neck on his fellow musician, Sarkodie.

But for sometime now, the Dancehall musician has been hitting on his once-upon-a-time best friend.

One jab he keeps sending Sark’s way is that, he’s broke.

Even when Strongman Burner parted ways with Sarkcess music recently, Shatta implied that it was because Sarkodie was too broke to invest in Strongman’s career.

Sarkodie who watched the match and was impressed with Messi’s performance took to his Facebook page to write  that the Argentina Star is not a human being.

Taking to Twitter, the “Kakai” hitmaker wrote that he love Messi but he wish he was a musician like money no go be problem at all. 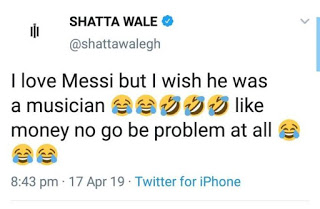 So to our understanding Shatta Wale mean to say that Sarkodie who’s a musician is hailing Messi but he’s broke.
But if Messi were to be a musician just like Sarkodie, he wouldn’t have been broke.
SHARE: