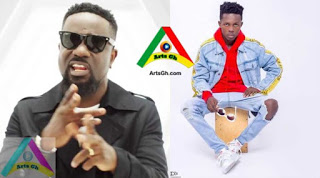 Sarkcess Music label boss Sarkodie has clapped back on his former label signee Strongman Burner after the latter made a tweet mocking him.
The two music stars were in the news trending after reports of them parting ways emerged
Strongman Burner was signed to Sarkodie’s Sarkcess Music Label in March 2017 with the aim of taking Strongman’s music career to the next level but although this great signing raised a lot of hope for most Ghanaian music lovers, they were disappointed after numerous months where they believe the young rapper’s state is virtually the same when he signed to Sarkodie’s label.

Following their parting ways in April 2019, Strongman took to twitter and made a tweet that did not go down too well with Ghanaians and most especially Sark natives.

His tweet which gave a hint that his former boss Michael Owusu aka Sarkodie was not a good manager or leader. His comments were likened to the role of football coaches and managers.

“Most good footballers turn to be bad coaches. Don’t be deceived,” He tweeted.

Many industry stakeholders, however, condemned the youngster for his demeanor and cautioned him to be careful with the likes of Richie Mensah who in a tweet advised Strongman to be grateful and respectful to Sarkodie who has become a living legend in Ghana’s music industry.

In response to Strongman’s mockery, it was expected that Sarkodie was going to react to his former label signee and until yesterday all nerves would have still stayed restless.

The ‘Can’t Let You Go’ hitmaker has finally responded to Strongman’s comments on twitter and this time has shown that he is not perturbed by the aggrieved young rapper.

Sarkodie hinted in a tweet on his Twitter page that, regardless of the sentiments and criticisms that are thrown at him, his goal and vision will not be curtailed.

He implored Strongman to stop being childish and grow up to the game by tweeting:

Everything we enjoying today is a result of someone’s silly idea that only them believed in … Discussions, plotting about you won’t kill that dream you have till you allow it … Forgetti yawa no na sei ho’

Everything we enjoying today is a result of someone’s silly idea that only them believed in … Discussions, plotting about you won’t kill that dream you have till you allow it … Forgetti yawa no na sei ho 😊